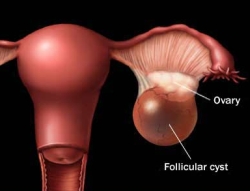 Recognizing the different types of ovarian cysts is crucial to determining how to treat these growths in the ovaries. However, doctors are not the only ones who benefit from knowing what each of these cysts have in common and what distinguishes them from other types. Here is what you should know about the different kinds of ovarian cysts and how they are treated.

Functional Cysts are easily the most common of all varieties of ovarian cysts. Developing as part of the normal process of menstruation, cysts of this type tend to be treated with relative ease, and may cause little to no problems. Many health experts tend to identify or class functional cysts into three distinct categories. These three classes are known as Graafian, Luteal, and Hemorrhagic.

A Graafian Follicle Cyst (See image on right) is easily the most common of all types of ovarian cysts. This type can develop quickly, generally only grows for a short time, then is gone as quickly as it appears. While some women do experience a degree of pain with this kind of cyst, it is usually mild and fades rather quickly. 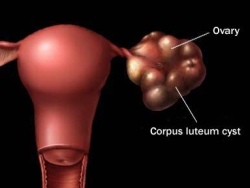 The Corpus Luteum Cyst (See image on right) tends to be larger than the follicle cyst and is also more likely to rupture during the process of menstruation. However, this kind of cyst is generally considered to be relatively mild in nature, although there is more chance of pain in the abdomen and a lack of energy while the cyst is regressing. In general, a corpus luteum cyst may take three to four menstrual periods to run its course. 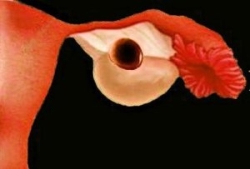 One of the more painful types of ovarian cysts is know as the Hemorrhagic Cyst (See Image on right). The potential for pain is more pronounced with this type. Sometimes known as a blood cyst, it develops when a blood vessel ruptures and drains blood into the fluid already collected in the body of the cyst.

As the cyst expands, there is a greater chance of developing a Ruptured Ovarian Cyst, which in turn causes blood to spill into the ovary. This can create severe pain, especially if the ovary in turn ruptures and allows the collected blood to enter the abdominal cavity. Keep in mind that if you were to experience a hemorrhagic cyst, the main symptom you would notice would be pain in the pelvis and vagina, but there is almost no chance of vaginal bleeding occurring. 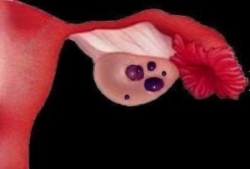 An Endometrial Cyst (See Image on right) is a growth in the ovaries that develops due to the presence of endometriosis, and normally utilizes tissue from the inside layer of the uterine wall to form the nucleus of the cyst.

When a portion of this tissue disconnects from the uterine wall, it can collect in the ovary where it begins to grow. As the cyst grows, it can trigger abdominal pain, vaginal bleeding, headaches, and a host of other aches and pains.

Perhaps the most bizzare type of ovarian cyst is the Dermoid Ovarian Cyst. This type of cyst contains developmentally mature skin complete with hair follicles and sweat glands. Because it contains mature tissue, they are almost always benign.

Of all the types of ovarian cysts, the Pathological Cyst is the one that is the greatest cause for concern. Cysts of this type are generally quite large and have the highest chance of developing into a malignancy. These include cystadenomas and those associated with polycystic ovarian syndrome. Should your doctor find a cyst that he or she believes is pathological, there is a good chance that surgery will be scheduled immediately.

While many types of ovarian cysts are common and will clear up on their own, seeking medical attention is always a good idea. Doctors can provide help in managing the symptoms as the cyst shrinks, or take action if the cyst continues to grow and becomes a threat to your health.