The Most Common Type of Cyst

One of the more common types is known as a hemorrhagic ovarian cyst. You may not have been aware that there are different types of ovarian cysts. Sometimes called a blood cyst or hematocyst, a hemorrhagic cyst can cause a great deal of pain, and may even rupture in some cases.

A hemorrhagic cyst develops when one of the small blood vessels located in the wall of a recently formed cyst breaks for some reason. Blood from the vessel then spills into the body of the cyst, causing it to begin swelling at a fairly consistent pace.

As the blood engorged cyst swells, it stretches the covering on the ovary, creating a great deal of pain. Generally, the pain is felt along the right side of the abdominal area, although some women find the pain seems emanate from the left side.

Along with creating a significant amount of pain, a cyst of this type will often begin to develop blood clots. The clots can further complicate the situation by restricting blood flow. This in turn increases the level of discomfort, as well as increasing the risk for some type of damage to the ovaries.

A Hemorrhagic Ovarian Cyst May Rupture

While it is relatively uncommon, it is possible for a hemorrhagic ovarian cyst to rupture. When this happens, the blood that was encased in the cyst spills into the abdominal cavity. The pain will intensify noticeably when a rupture occurs, as well as increase the chances for infection in the cavity.

While a hemorrhagic ovarian cyst can cause a great deal of pain, there is not usually the need to undergo surgery. In many cases, the cyst will grow for a period of time, then begin to shrink and eventually disappear. Should you find the pain is noticeable enough to disrupt your day or keep you from sleeping soundly at night, your doctor can prescribe medication to help you manage the discomfort until the cyst shrinks. 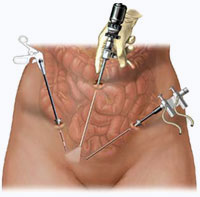 For the most part, cysts of this type are self-limiting. That is, they do not tend to spread, and are less likely to rupture than some other cyst varieties. However, this does not mean you should avoid working with your doctor to deal with the situation.

Monitoring the hemorrhagic ovarian cyst to make sure that it is beginning to level off and does not pose a threat to the ovaries is very important. Even if the cyst ruptures, there may not be a need for surgery; depending on the findings of your physician, taking antibiotics to help with the pain and to kill off any chance for infection will be sufficient.

In situations where surgery to remove your hemorrhagic ovarian cyst is necessary, many women can undergo a less invasive procedure known as a laparoscopy. This approach requires two or three small incisions that allow the surgeon to locate and remove the cyst with relative ease.

Assuming there are no complications during the surgery or the recovery period, you could be healed in as little as a couple of weeks. However, your doctor can tell you what to expect, based on the general status of your health, and any risk factors that would impact your recovery, such as obesity or the use of tobacco products.