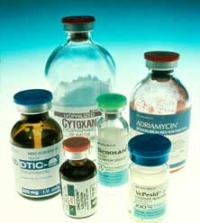 Ovarian Cancer Chemotherapy is the use of drugs to treat cancer, by either destroying, stopping the spread of or slowing the growth of cancer cells. There are a number of chemotherapy drugs that have been proven to work well for ovarian cancer. The main problem with them, though, is that they are not given the best chance to act because the tumor is too big when it is detected and the drugs can’t get to all the cancer cells to act on them. 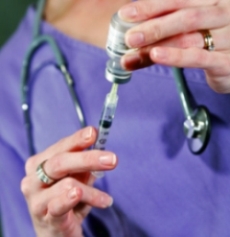 There are a number of routes used to administer ovarian cancer chemotherapy. The most common is injection into a vein (intravenous). Other methods include intraperitoneal injection (into the abdominal cavity), oral administration and intramuscular (into a muscle) injection.

The dosing regime and choice of drugs will depend on a number of things, for example the type of ovarian cancer, the overall health of the patient, and how they respond to and recover form the treatment. Most treatments are given in cycles, to allow some time for normal cells, which are also affected by the drugs, to recover from the effects of the drugs. Also, the treatment is usually started after the surgery to remove as much of the cancer as possible and give the drugs the best opportunity to exert their effects.

The intraperitoneal method of delivery is currently being investigated and has been shown to increase the survival of patients with the more advanced stages of cancer (stages 3 and 4) who have had surgery. In this type of treatment drugs are carried into the abdomen through a thin tube. The main problem with this treatment are the catheter problems involved with the administration and the toxicity to the body, which although mostly reversible has meant this method has not yet become universally accepted by the gynecologic community.

The dose and type of drug given will depend on the type and stage of cancer you are diagnosed with. The drugs most commonly used for the initial treatment of ovarian cancer chemotherapy include:

Some of these can be administered either alone or in combination with another one of these drugs. Thy are usually given every 4-6 weeks and repeated about 6 times. They are usually given through a drip into your bloodstream over a 3-hour period in an outpatient department of a hospital.

The drugs most commonly used to treat recurrent ovarian cancer are:

Side Effects of Chemotherapy

Chemotherapy drugs act by killing rapidly diving cells like cancer cells, but because many normal cells in or body also divide rapidly, they will also be damaged the drugs. This is why chemotherapy has a number of side effects such as:

Anaemia – a decrease in the number of red blood cells, which can cause dizziness, fatigue, headaches, low blood pressure, irritability, shortness of breath

Leukopenia – reduced number of white blood cells, which can make you more suceptible to infections

Thrombocytopenia – a reduction in the number of platelets. This may cause you to bruise easily and bleed longer than usual after cuts or scrapes

Leukopenia – reduced number of white blood cells, which can make you more suceptible to infections

There is a lot of research into the field of ovarian cancer chemotherapy. For this reason, there are many clinical trials for cancer being carried out.