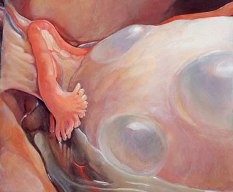 Many women will ask their physicians just what is an ovarian cyst? In reality, a cyst of this type is very simple to understand. Many times, the confusion comes about due to the common misconception that cysts are always signs of trouble and are highly likely to be life threatening. Here is some basic information that will help you understand the nature of an ovarian cyst.

In simple terms, an ovarian cyst is an abnormal growth that develops in one or both ovaries. The cyst begins life as an ovarian follicle. Once it has reached a size that is more than two centimeters, the growth officially becomes a cyst.

For the most part, the cyst is largely nothing more than liquid. A thin wall contains the liquid. For the most part, ovarian cysts are relatively soft to the touch and can be punctured with ease. However, there are some examples of cysts that developed with thicker walls, a factor that usually resulted in more pain for the woman dealing with the cysts.

There is a great deal of variance in the size of this type of cyst. Some are very small growths that never get larger than the size of a small pea. Others may grow to a size that roughly corresponds to the size of a mature cantaloupe (rockmelon). Doctors tend to monitor the growth pattern of ovarian cysts once they are detected in order to determine the most effective form of treatment.

One of the major misconceptions connected with explaining to anyone who asks, “what is an ovarian cyst?” is getting people to understand that the cyst is not necessarily cancerous. In fact, the vast majority of cysts are benign. Most of them will grow for a short time, then begin to shrink as they are reabsorbed into the body. Often, a cyst in an ovary will develop, grow, shrink, and ultimately disappear within three or so menstrual cycles. 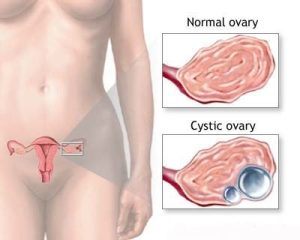 While ovarian cysts tend to be benign, that does not mean they are not capable of causing a great deal of pain. This is an essential point when called upon to answer the question what is an ovarian cyst?.

It is not unusual for women with a cyst to feel some sort of constant discomfort in the general area of the pelvis. The pain is sometimes concentrated in the thighs or vagina, but may also be present in the lower back or the abdomen. Fortunately, many women find relief by using over the counter pain relievers in conjunction with heating pads and warm baths.

While a cyst is the ovary is treated as an abnormality, it is a very common occurrence. Women who are premenopausal are at the highest risk for developing cysts in the ovaries. However, there is also a significant number of women who have gone through menopause and still occasionally develop cysts. This means that any woman who is past the age of puberty is likely to experience ovarian cysts from time to time.

Men as well as women should be knowledgeable enough to answer the question what is an ovarian cyst? with relative ease. Having this information readily available not only makes it possible to quickly allay fears but can also motivate others to seek professional medical attention in order to assess the status of the cysts.

While an ovarian cyst rarely develops into a malignancy, seeing a doctor makes it possible to quickly treat the condition and eliminate the chances of allowing the cyst to become life threatening.

So next time you hear someone ask “What is an Ovarian Cyst?” hopefully this article will have added some value and you can explain exactly what an ovarian cyst is.