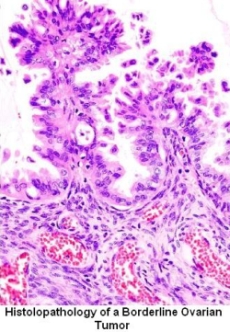 What Exactly are Borderline Ovarian Tumors?

Borderline ovarian tumors are a type of epithelial ovarian tumors that exhibit some characteristics of malignancy, but appear to still be early enough in their development to be treated successfully. 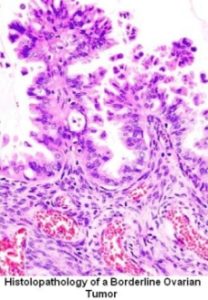 With tumors of this kind, the usual course of treatment is to surgically remove the growth and conduct a biopsy. The structure of the follow up treatment will vary, based on the findings of the biopsy.

The concept of a borderline tumor in the ovaries has been around since 1929. At that point, they were sometimes referred to as semi-malignant tumors. This helped to separate them from growths that had every indication of being benign, while at the same time distinguishing them from tumors that were highly suspected to be malignant.

However, it was not until the decade of the 1970′s that the majority of the medical community began to routinely classify ovarian tumors in one of these three categories (benign, borderline and malignant).

It is estimated that borderline ovarian tumors account for roughly 15% of all epithelial ovarian tumors that are diagnosed in any given year. While females of any age can develop this class of tumor, adult women in their childbearing years are at greater risk.

These tumors are often caught before there if the chance to progress to a malignancy and are often slow-growing. They are also generally confined to the ovary at the time of diagnosis. These factors contribute to the high survival rate of women with borderline tumors. One SEER study reported 10-year survival rates of 99%, 98%, 96%, and 77% for stage I, II, III, and IV, respectively (Trimble et al. 2002).

Also referred to as Low Malignant Potential (LMP) tumors, borderline ovarian tumors generally occur at younger ages. In a Norwegian study on women diagnosed between 1954 and 1993, the median age was 53 years. At the time of diagnosis more that 90% of cancers were localized to the ovaries (Bjorge et al. 1997). In comparison, the median age for diagnosis of epithelial carcinoma is around 63 years of age.

When it comes to symptoms, it is not unusual for a woman suffering with a borderline tumor to have no symptoms at all. This is especially true in the early stages. However, there are some symptoms that seem to occur at some point prior to the diagnosis. These include pain in the abdomen, and an unexplainable increase in girth around the waist and abdomen.

As for the causes for borderline ovarian tumors, there is some difference of opinion in the medical community of what can increase the odds of developing this form of cancer. The age of the female at the time of the first conception, as well as the age of the woman at the time of the first delivery, are thought by some to be a factor. Others believe that smoking can predispose a woman toward this type of ovarian tumor. Still others find evidence that a history of ovarian cancer among close female relatives is also a strong indicator.

Because borderline ovarian tumors are usually self-contained, the treatment process is fairly straightforward. Surgery to remove the tumor is normally the first step. The tumor is then submitted for a biopsy; this helps to determine if there is a chance that any cells may have escaped and pose a threat to the one or both ovaries, or any of the other surrounding tissue and organs. It is not unusual for the patient to undergo a short series of radiation or chemotherapy after healing from the surgery.