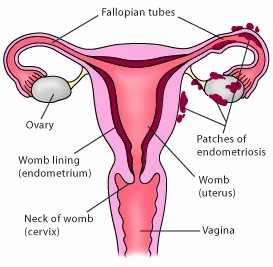 What is the Link Between Endometriosis and Ovarian Cancer?

To understand the connection between endometriosis and ovarian cancer, it is first necessary to define endometriosis. This is a condition in which the membranes that adhere to the walls of the uterus begin to generate tissue that starts to form into other organs or cysts.

Often, these growths are referred to as chocolate cysts. Those organs are not necessarily fully formed, but they may position themselves on or in various organs in the pelvic region. The ovaries are one of the more common locations for this type of abnormal tissue activity to take place.

When you develop endometriosis, there is usually a considerable amount of pain in the pelvic area, especially in the lower section of the abdomen. While beginning as an occasional feeling of discomfort, the pain increases over time and becomes constant. As the mass continues to grow, the pain intensifies. Some women find that the pain increases noticeably during menstruation. Depending on the circumstances, hormone therapy may be the solution for endometriosis. However, there is also the possibility that surgery will be necessary.

When considering the relationship between endometriosis and ovarian cancer, it is important to note that not every case of this health issue will develop into a cancerous tumor. The mass may be self-contained and benign in many cases. However, there is a mounting body of evidence that supports the idea that women who do develop endometriosis are at a higher risk for eventually experiencing ovarian cancer, especially if the mass developed in one of the ovaries.

For decades, healthcare experts have speculated on whether the link between endometriosis and ovarian cancer was not a situation of one condition leading to the other. Conventional wisdom states that there is no direct link to the two, but does acknowledge the possibility of an indirect link. One theory supported the idea that both health issues could develop from the same triggers, creating what appeared to be a link. This idea seemed to be supported by the fact that not every woman who has ovarian cancer has experienced endometriosis and vice versa.

In recent years, this theory has been challenged. While still acknowledging that ovarian cancer can occur without the presence of endometriosis, a number of researchers point to studies where this development of an organ within an organ did seem to increase the chances of ovarian cancer in many women. However, these results are not universally accepted at this time, and more research into the connection between endometriosis and ovarian cancer is taking place.

Until this additional research reveals more information about how ovarian cancer and endometriosis may be connected in some manner, do not allow yourself to worry about experiencing one condition as a result of having dealt with the other.

Even if there is eventually a universal acceptance of a body of evidence showing a direct link between the two, there is no guarantee that you would eventually face both diseases.

While closely monitoring the development of cysts or growths in the pelvic area is always a smart move, assume the best until you have evidence to the contrary.