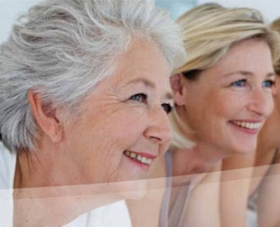 Can You Get An Ovarian Cyst After Menopause?

Some women may believe that they cannot get an ovarian cyst after menopause. If the issue of a growth in the ovaries even comes up, they wonder if it is possible to develop an ovarian cyst after menopause. The short answer to this question is yes, it is possible to develop this type of cyst once menopause has been experienced. However, it is important to note that while the possibility exists, the potential for postmenopausal women is very different from that of women who have yet to go through menopause.

Ovarian cysts are small sacs that develop in the ovaries; these sacs are filled with liquid and have the capability to grow over time. In most cases, the cysts appear, grow for a short period of time, then disappear.

The failure of an egg to not release properly during the menstrual cycle is a common reason for the development of a cyst, but is not the only origin possible.

Females who are old enough to bear children are far more likely to experience a cyst than women who have been through menopause. Still, a significant number of women past their childbearing years can and do develop cysts in the ovaries. Figures related to postmenopausal women in the United States indicate that over 14% of females in that group do develop cysts throughout their lives.

In the past, there were those who believed that is was impossible to develop an ovarian cyst after menopause. Even when confronted with mounting evidence to the contrary, there was a small contingent that speculated some of the women classified as postmenopausal had in fact not gone through menopause. This theory was quickly discounted, as advances in medicine and medical technology proved that women of all ages can and do develop ovarian cysts.

There is no significant difference in the ovarian cyst symptoms that manifest based on the age of the female. Women of all ages may have pain the lower abdomen, pelvic area and the lower back. Changes in bowel movements and urination can still occur.

Frequent fatigue is not unusual in postmenopausal women who develop cysts in the ovaries. Symptoms such as nausea, bloating, or recurring headaches may take place regardless of the age of the woman. Just as the symptoms are similar at all ages, treatments for an ovarian cyst after menopause are just the same for older women.

It is very important that women who are past their childbearing years to not assume they are no longer at risk for developing an ovarian cyst. Adopting this attitude can lead to ignoring warning signs and symptoms, which in turn increases the chances that the cyst will grow and eventually threaten the health of the ovary.

Rather than assuming that postmenopausal ovarian cysts are not possible, you should make it a point to report all related symptoms to your physician. This will increase the chances of locating the cyst and initiating whatever course of treatment your doctor feels is in your best interest.