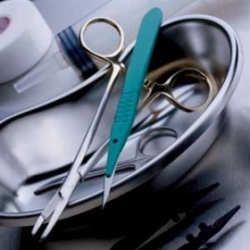 Most patients will undergo ovarian cancer surgery to treat their disease. This will usually be in addition to another form of treatment such as chemotherapy or radiotherapy. During the surgery, the surgeon, who will likely be a gynecologic oncologist, will remove as much of the tumor as possible. This is known as debulking surgery.

Debulking Surgery is especially important in Ovarian Cancer because it has been shown that the more thoroughly the cancerous tissue is removed, the better the chances of survival. Specifically, when there is no tumor left or the tumor mass measures less than 1 cm the ovarian surgery is said to be optimal, and patients have the best opportunity for survival. This is mainly due to the fact that the less tumor that is present, the more effective the chemotherapy or radiotherapy will be.

The type of ovarian cancer surgery performed will either be a laparotomy or laparoscopy. Laparotomies are performed through an incision in the abdomen, while laparoscopies are performed using a tube with a light and camera and operating equipment that are inserted into the pelvic cavity through small incisions. Apart from the cancer, other tissues and organs removed may include the uterus (hysterectomy), fallopian tubes and ovaries (bilateral salpingo-oophorectomy), omentum (omentectomy), one or more lymph nodes (lymphadenectomy). If during the staging process there have been cancer cells discovered invading the bowel, a portion of the intestine may also be removed.

When ovarian cancer is detected at an early stage and involves only one ovary it may be possible to perform fertility preserving surgery. For young women who have not undergone menopause and who want to retain their ability to have children, this may be very important. The good news is that there is an increasing amount of research into this topic, which is allowing a greater number of women to preserve their fertility following treatment for ovarian cancer, without compromising the outcome of their treatment. 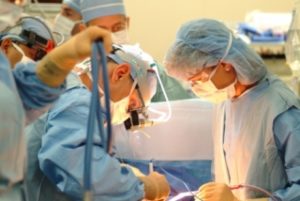 Following your ovarian cancer surgery there will be a number of things to recover from – physical effects of the surgery, emotional effects, and dealing with sudden menopause.

Physical Effects – Recovering from any type of surgery takes time. When you arrive home from hospital, be prepared to take it very easy for at least two weeks. Most of the time should be spent resting, with your feet up and avoiding standing for more than a few minutes at a time. To allow the healing process to be complete, don’t carry heavy loads, drive, or do any heavy housework like vacuuming for at least 4 weeks after the surgery.

Over the next two weeks after that you should be able to continue to build up your levels of activity which should be back at more or less your normal levels by six weeks after your operation. But until then, you shouldn’t lift anything heavier than about 4 kg or 8 lbs. It can also be quiet helpful to do some gentle walking while recovering to keep your fitness levels up and give you something to do while your body goes through the healing process.

Sex can feel different after ovarian cancer surgery. Your vagina will be shorter as a result, but because it is naturally very stretchy this shouldn’t make much of a difference. There will be stitches at the end of your vagina where the uterus and cervix where removed, so these must heal before you engage in full sex.

This takes about 6 weeks. However you may not feel ready to resume your sexual life after 6 weeks, and this is perfectly normal. It takes a while to get used to the fact that you had important parts taken and that you will no longer be able to become pregnant and won’t have any more periods. Even for women who had gone through menopause before their surgery, losing their uterus can be a very emotional experience.

Emotional Effects – On top of having to come to terms with being diagnosed with cancer, having major surgery can have a large impact emotionally. It can make you feel vulnerable, physically weak and get tired easily, which can all make you feel quiet down. The important thing to remember is that it is a natural process and virtually all women who go through this process will feel the same way, but over time you will feel better physically and emotionally.

The support and understanding of family and friends is critical at the time. However if you feel like you are not coping, talking to your doctor or a councilor or a support group of women who have undergone a similar experience can be very helpful.

Sudden Menopause – For women who haven’t yet gone through menopause and have both their ovaries removed during surgery will go into menopause. This can cause symptoms such as:

Because the ovaries have been suddenly removed during ovarian cancer surgery, hormones drop quite quickly so the symptoms can come on abruptly and be more intense than those of natural menopause. These symptoms can last for a number of months and the variations among different women make it impossible to predict how long they might last.

Hormone replacement therapy (HRT) can be taken to control your symptoms, however there are known risks involved with taking HRT, such as a slight increase in the risk of breast cancer in the general population, but HRT is known to improve quality of life of women who do take it, so you may want to talk to your doctor about the benefits and risks involved.

As you can see there is a lot to consider before undergoing ovarian cancer surgery, so I really urge you to do some thorough research and speak to more than one doctor before taking action.