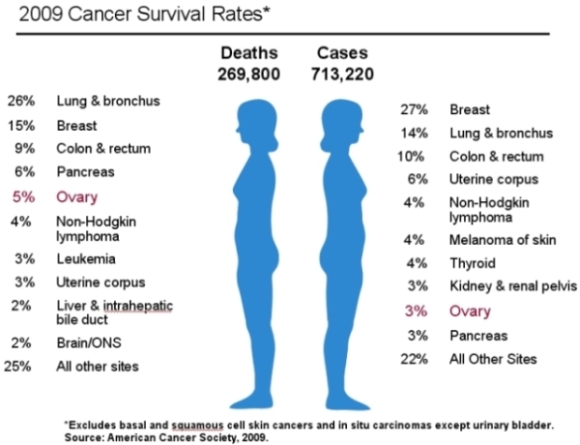 The increase in Ovarian Cancer Survival Rate has come about due to several different factors that can make a big difference in treatment and recovery. Here are the four main factors that have allowed survival rates to reach their current level, which consequently allows women today to have a much better chance of survival than in past generations.

The picture below illustrates the number of cases vs deaths caused by Ovarian Cancer in the US: 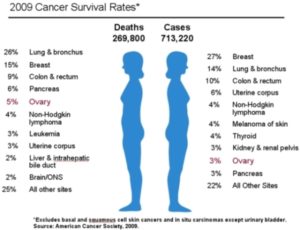 The first factor has to do with an increased ability to determine the type of ovarian cancer that has developed. People are not always aware that there are three different forms of this type of cancer: ovarian epithelial cancer, ovarian germ cell cancer, and sex cord stromal tumor. Each of these types of ovarian cancer requires slightly different courses of treatment. Because it is much easier to determine which form of the cancer is present in the ovary today, the ovarian cancer survival rate is much better than in years past.

Another important factor that has made a difference with the survival rate is the ability to properly assess the stage or level that the cancer has reached when it is first diagnosed. Knowing the current stage makes it much easier for healthcare professionals to quickly initiate treatment that will address the problem as it exists today, rather than trying some general methods and hoping they are the right ones. Defining and identifying various stages have improved the survival rate, simply because less time is spent guessing at how to initiate the proper treatment.

The age and general health of the female diagnosed with ovarian cancer is just as important as knowing the type and current stage of the cancer. Physicians and people in general understand more about the importance of exercise and nutrition as part of the treatment for many different diseases. This makes it a relatively simple process for the women with ovarian cancer to make minor adjustments in diet and lifestyle to promote better function of the body in general. This in turn has a positive impact on the survival rate, and has the added bonus of helping to improve the mental condition of the woman as well.

Many healthcare professionals also believe that the survival rate is impacted by whether or not the woman is experiencing the cancer for the first time, or if this is a second or even third manifestation of the disease. In general, the survival rate for women who have already lived through a bout with the disease is not as good as for women who are dealing with the cancer for the first time. However, modern medicine has closed the gap somewhat, and brought the survival rate for second-timers closer to those dealing with an initial case.