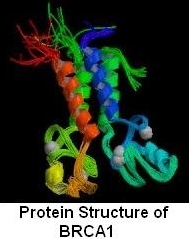 Understanding the BRCA1 Gene and its Role in Ovarian Cancer

Also known as the Breast and Ovarian Cancer 1 early onset gene, the BRCA1 is a gene that is responsible for controlling the growth of cells in the breast and ovary. As long as the gene is functioning normally, it poses no threat at all. In fact, it plays a major role in maintaining the health of cells. However, when some sort of abnormality occurs, this important gene can open the door for the development of several different forms of cancer, including ovarian cancer.

Considered part of the family of genes that is normally identified as the tumor suppressor genes, BRCA1 works by regulating the process of cell division. This is accomplished by managing the rate at which cells divide as well as controlling how fast they grow. When functioning properly, the gene prevents random bursts of growth and cell division that increase the chances of the development of abnormal tissue that could in turn threaten the health of the individual.

The problem arises when something happens to prevent the gene from working as it should. As the cells begin to reproduce and expand in random ways, the potential for the development of a tumor increases significantly.

Currently, there are over 600 different mutations of the Breast and Ovarian Cancer 1 early onset gene. A common factor among many of these mutations is the production of a protein that is unable to help fix mutations in other genes. Instead, the number of mutated genes accumulates and may allow the cells to grow uncontrollably to form a tumor.

The average age of diagnosis for women who carry a mutated BRCA1 gene is significantly lower than those with the normal gene. Most ovarian cancers develop in women over the age of 50, whereas women with harmful BRCA1 mutations often develop cancer before 50 years old. A number of studies have reported that the survival may be higher for women with these gene mutations, at least in certain populations (Tan et al. 2008).

There is no way for you to know in advance if you have a mutated BRCA1 gene. You will not experience any type of discomfort or have any type of sign that the production of an abnormal gene is taking place. Only after the growth has begun to develop enough to cause symptoms and be detectable by various ovarian cancer screening methods will you know that anything is out of the ordinary.

This is a great video that explains in easy to understand terms what happens when someone carries a defective BRCA gene.

If you have one or more relatives that have been diagnosed with breast and/or ovarian cancer, you may want to consult your doctor about the possibility of undergoing genetic testing and regular screening. And by making sure you have a complete physical each year and report any unusual sense of discomfort in the abdomen and pelvis to your doctor immediately, you have an excellent chance of detecting any potentially dangerous growth early on, thus increasing your chances for survival.