An Explanation of Stage 1 and What it Means to You

In Stage 1 Ovarian Cancer the cancer is confined only to the ovaries. It is divided into 3 subgroups:

1a: Involves only one ovary, the capsule is intact, there is no tumor on the surface of the ovary, and no malignant cells in the abdominal fluid or peritoneal washings.

1b: involves both ovaries, the capsule is intact, there is no tumor on the ovarian surface, negative washings.

1c: the tumor is limited to the ovaries, in addition to any of the following: capsule ruptured before or during surgery, tumor on the ovarian surface, cancer cells in ascites (abdominal fluid), positive washings.

See the image below for a better idea of what Stage 1 Ovarian Cancer looks like: 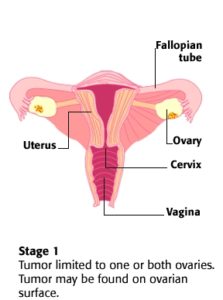 A recent study performed by Wright and colleagues published in the journal Cancer (2009), has shown that when ovarian cancer is diagnosed with stage 1 cancer and when it is still confined to one ovary and only that ovary is removed, the 5-year survival rates are the same as those that had both ovaries removed during ovarian cancer surgery. This has implications for women’s menopause and fertility.

The usual treatment for this disease is the removal of both ovaries, which produce hormones. When the surgery to remove ovarian cancer is performed it effectively makes women go through menopause. In addition to experiencing the symptoms of menopause (hot flushes, vaginal dryness, osteoporosis), this procedure has been linked to an increased risk for cardiovascular disease, dementia and earlier death in women when performed before they are 55 years of age.

So for premenopausal women the preservation of one ovary would be desirable to avoid these effects.

Meanwhile, the percentage of ovarian cancers occurring in women aged 40 or younger is 17%, and this rate is believed to be rising. By being able to preserve the ovary unaffected by ovarian cancer, premenopausal women will be able to continue their childbearing, which will be invaluable for some women.

With some further studies, we will see if this type of procedure can be offered to all young women with stage 1 ovarian cancer or stage 2 ovarian cancer, but the results look promising indeed.