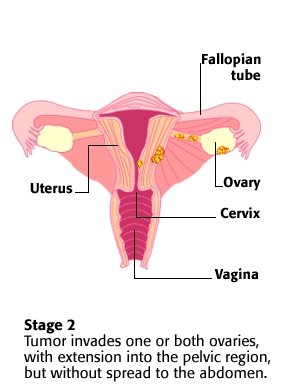 Stage 2 Ovarian Cancer & How to Increase Your Survival Rate

Stage 1 and Stage 2 Ovarian Cancer make up what is referred to as the early stages. It is well know that detection in the early stages greatly increases a sufferers chance of survival, as the cancer is much more treatable having not spread as far as in Stage 4 for example. In Stage 2 the cancer has spread/grown outside the ovary or ovaries but still contained within the pelvis. The 3 subgroups are:

2a: the cancer has extended to the fallopian tubes or uterus.

2b: the cancer has extended into other pelvic structures, (for example the rectum or bladder).

2c: there is pelvic extension of the cancer like IIa or IIb, but with positive peritoneal washings.

See the image below to see what Stage 2 looks like: 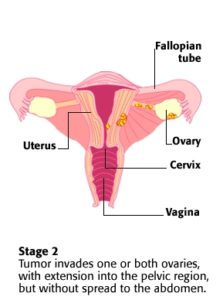 The main difference between Stage 1 and Stage 2 is that in Stage 2 the cancer has grown beyond the ovaries.

The survival rate for sufferers with Stage 2 is statistically 50-70%, which is significantly higher than that for the later stages (Stage 3 & 4) again outlining the importance of early detection.